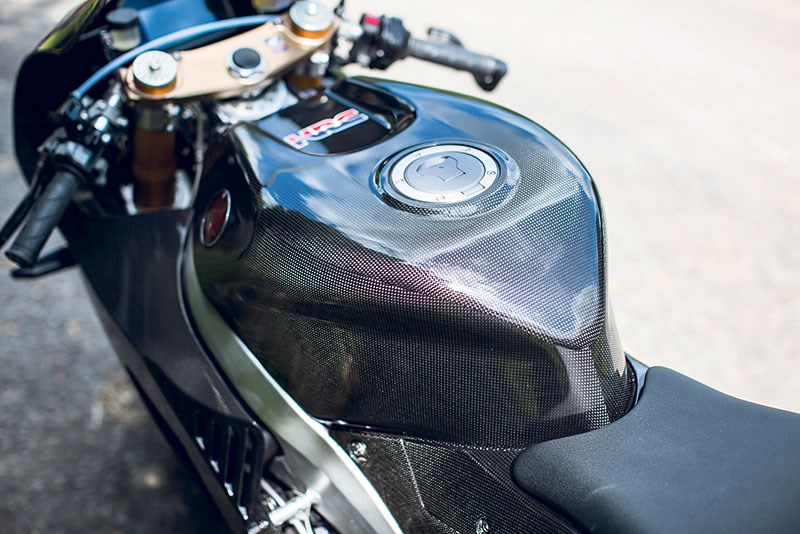 My worst case so far of ‘commentator’s curse’ came last weekend. It definitely wasn’t a moment neither I nor the person involved will be forgetting in a hurry.

It happened at the Brackley Festival of Motorcycling, a street event celebrating its tenth anniversary in which owners and riders of classic and modern racing bikes gather to parade up and down the closed High Street in Northamptonshire. Amongst the stars were Freddie Spencer, James Ellison and his brother Dean.

In many cases the proud owners of the bikes were riding. One was Kevin Wood, a lifelong enthusiast who brought to Brackley his immaculately turned out, limited edition RC213V which is based directly on the Honda MotoGP machine. Not only that but this was a fully race-kitted RC213V-S, very rare and costing around £160,000. It was the most expensive bike there – by far.

Kevin brought with him a great sense of humour. I was first informed of this over dinner on Saturday when co-commentator Barry Nutley and I were told how, at a recent bike event, Kevin’s pride and joy had been up on a stand only for a van driver park up, open his door and send the Honda crashing to the ground. It sustained no less than £60,000 worth of damage.

Thankfully Kevin was eventually able to see the funny side, confirmed on Sunday as I interviewed him in front of the gathered crowd and over the public address system. He recalled the story through his crash helmet with a laugh, much to the amusement of the Brackley crowd and myself. ‘Good luck! Don’t throw it down the road, Kevin! It’s an extremely expensive bit of kit!’ I said before promptly wrapping up the interview and moving to the next rider before the final run of the day began.

You can imagine what happened next. On a slightly greasy surface, one rider applied a touch too much power exiting the off-camber lower hairpin linking the two lanes of the High Street. The rear end came around as the bike skidded painfully into the temporary roadside barriers followed closely by its rider. ‘You’re joking!’ Barry exclaimed woefully over the PA having had a perfect view of the crashed bike out of the equally temporary commentary box window. ‘It’s Kevin Wood with the Honda!’ I announced with my trackside microphone, barely able to comprehend what was happening as my heart and the crowd’s skipped beats simultaneously.

Kevin was thankfully alright but the bike was bent. 60,000 quid’s worth of damage in its previous mishap and now goodness knows how much has been sustained. This happened right at the end of a long, incident-free day. I watched as a forlorn Kevin rolled the bike back to the makeshift paddock, in my head the words ‘Don’t throw it down the road, Kevin!’ from a few minutes earlier. You couldn’t script it, could you?