Following a dramatic weekend of racing at Magny-Cours, when the six podium slots across the two WorldSBK races were occupied by as many different riders, I caught up with Aruba Ducati’s Marco Melandri. The Italian discussed his season so far, his eagerness to win regularly and how the World Championship could be improved.

A regular WorldSBK winner and front-runner in 2014, Melandri found himself dragged into Aprilia’s MotoGP project the following season: a campaign that would yield pain and embarrassment as the Ravenna man, five times a MotoGP race winner in the past, languished at the back and terminated his season after Assen.

Critics were quick to launch scathing attacks on Ducati’s decision to bring the now 35-year-old back into WorldSBK at the start of 2017. The criticism has proven unwarranted, with Melandri having racked up one race win, three fastest laps, three front row starts and 11 podium finishes from the 11 rounds and 22 races to date.

“As a rider, you know inside whether it is time to stop or not,” Melandri told me in the Ducati garage on Sunday evening at Magny-Cours. “When I stopped in 2015, I was very disappointed because it wasn’t my choice. I had done very badly because my confidence had been knocked out of me. None of that was my choice. But I knew inside that I still had something to give to this sport. Luckily, people here (at Ducati) believed in me and they knew I could be strong again. For sure, I want to be stronger. I want to fight for wins. Podiums are always good but I want more.”

What about the pre-2017 condemnation from certain members of the press and public alike?

“I can understand why so many people didn’t believe in me,” he says with a smile. “People have been critical of me all my life! I don’t care about that anymore!”

Before continuing to watch the Motocross of Nations on his smartphone, Melandri shared his opinions on the idea to introduce adjustable rev limits to World Superbike in 2018 and a spec ECU for the following year.

“The rev limitation will probably make it closer between the different bikes,” he continues. “Our bike is like a 2-stroke in the sense that it has a very small RPM range, so increasing the torque would be extra work for Ducati. It won’t be easy, but if it’s better for the championship then I welcome it. With regards to the spec ECU, I don’t see it changing much. Of course the ECU is important, but the engineers will put the right numbers into it for the rider on the bike. Ultimately, the best teams will always remain the best because they have the best engineers and the best riders to give feedback to those engineers. In that respect, people still make a difference.

“In my opinion, the engine rules were more open back in 2014. A greater number of bikes were able to win races. With the more limitations you put in place, the more difficult it becomes for the riders and the more expensive it is for the manufacturers because everybody has to go to even greater lengths to make a difference. For me, the spec ECU wouldn’t be the best way to improve the championship.”

Melandri went on to suggest that the new-for-2017 grid shake-up – Race 1 finishers 4th-9th go 1st-6th on the Race 2 grid, while the Saturday top three becomes Sunday’s third row but in reserve order – should be taken to new heights.

“It would be better to reverse the top nine completely: the winner of Race 1 would start ninth in Race 2, while ninth in Race 1 is promoted to Race 2 pole,” he suggests. 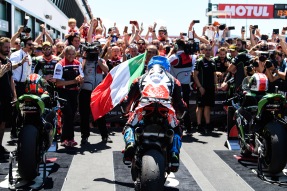 “Finding the answer is not easy, but we have to do something. We have a nice show but not so many people in the crowd. Magny-Cours was good, despite the rain on Saturday, but at many circuits we have relatively small crowds even though the show is very good. The promoter (Dorna) should try to find different ways to promote the championship, to involve even more the people who come to see the races. The fans need to feel more important. World Superbike has to be different to MotoGP. It’s not easy for the promoter, but we know how good they are because of what they’ve done with MotoGP. Now we need to find something for World Superbike as well.”

With only four races remaining this year, Melandri is seemingly marooned in fourth overall and firmly ‘best of the rest’ behind clear leaders Jonathan Rea, Tom Sykes and Chaz Davies. Next stop for the Italian is Jerez, where on his last WorldSBK visit in 2014 he took his Aprilia to a glorious late-season double victory.